I received an email from a young lady requiring a custom made costume to wear to her Fancy Dress Birthday party which coincidently fell on Bastille day. Naturally the theme of the costume party was “Anything French”
The lady was quite busty and couldn’t find anything suitable to fit her! So she explored the net and found Agent Costume to make her a special costume up from scratch.

We conversed over several emails, suggesting ideas and throwing around possibilities: Moulin Rouge, Aristocrats, Peasants, Modern French dress with tastefully tied scarf and beret.
She had some gorgeous silks hiding away in her cupboard that she had once purchased in Singapore, and decided, not only should take advantage of this precious stock and use them, but that they would best suit the Aristocrat theme, and so, we decided to turn her into Marie Antoinette with massive side pannier hips with a low neck busty corset type top.

[box type=”info”]Pannier is a bread basket, or wicker baskets, slung either side of a pack animal – or bicycle – to carry goods.[/box]

At the first meeting, she brought her stock of materials, and we decided which would best work together and how. Even though the colours of the era tended to be more on the lighter pastel shades, we decided the fabric quality was rich enough for the time whilst also flattering to her skin tones and personality.
We designed it so it looked as though she was wearing a jacket – as much of the party would be outdoors, and I added a hood for fun and function. Hoods were usually attached to capes, but we made an exception in this case, because, quite simply, it looked awesome! while still keeping to the impression of the time.
I took her measurements.

The next meeting, she tried in a full calico toile (mock up), made from a pattern I drew from scratch.
from that we further defined her neck line, sleeve shape, body shape, and where the boning would go to add structure and support.

The next meeting we had, she tried on the full deal, with only minimal alterations needed. The decorations had been pinned on awaiting approval.

At the final meeting, she was able to take the whole thing home.
Three pieces: A padded pannier belt, a gathered skirt (close to 10 metres of fabric!) and a boned corset type top with trim.

The total hours spent on that piece, including fittings was 60 hours.

Now that I have her body shape, I could make up another outfit in less time.
And gladly. When people have personalities easy to get along with, we happily go the extra mile.
I really enjoyed making this outfit, and have already picked up on some ideas of how to make it faster, should I ever have to make one again. 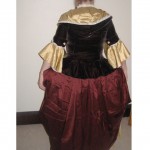 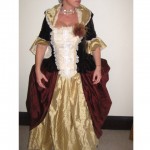 If you ask me, I say this costume fulfilled the French theme in at least two ways:
1. A french Aristocrat just before the French Revolution
2. The famously tasty custard filled, chocolate sauced pastry dessert Profiteroles au Chocolat. (Chocolate Profiteroles, yum!)