So I get this phone call one afternoon, something along the lines of: “Hi we need some costumes made up for a promotional event next week. We have some designs but the client isn’t happy with them, are you able to send us some designs of your own, and then get them made up for us? We have put aside a budget of —-”

Well, of course I can.
but my concerns are:
One week?? to have designs confirmed, fabrics sourced and costumes constructed? that’s really stretching it!
I have to find the time late that evening to draw up some illustrations in order for them to get approved in time.
For the budget and the time they had, I was limited to one morning of racing around town fabric sourcing. I would have to use what I found and get the closest match, rather than having the time to source an exact match.

After all this thought I had a chat to a friend who said “Just take it on. You can do it”
And i thought, “Of course it’s possible! it will just be a challenge to remain focused and on the ball and shorten my sleep hours slightly,and who knows? they may not even approve the design in the first place!”

That night after reading the brief and studying the graphics they had sent through, i drew up a man to scale, added his stilt length and dressed him.
The designs that the company had been sent and didn’t really like that much were not drawn to scale, they were more like “Ideas” rather than actual designs to follow. I’d have to change all the scales of things to fit people and then the finished product would look very different from the illustration. Or I would have to create a full mascot costume, and somehow make it so that it was light enough for the wearer to move with ease, and all that would take weeks, and cost a whole lot more than they were willing to spend on this particular promotion.
Several hours later my stilt walker was complete with a few colour pattern variations, I sent him off and crashed into bed for a deep well deserved sleep.

Good news! The design was approved, as well as the revised budget and a colour scheme selected. I hadnt had time to draw up the living statue, but i did some research and sent through some images I was inspired with and talked them through my intention.
I revised the illustrations just to ensure I had understood the request, and it was action stations all a-GoGo.

Just one thing. I was waiting for the deposit.
So i started on some other projects which weren’t as urgent, doing my best to remain focused on them until the deposit came through and then “Bang” the starting gun sounded and I was off. Thankfully, it turned out they had more time up their sleeve and the even wasn’t until a few days later than the initial deadline.

With my little pantone colour book and window I scoured stores for the right colours and finally found something I thought would work. the fabric was light so it would need to be backed to give it body like a suit.
I bought a white suit for the living statue, and paints and paint fixatives, and shoes to paint, and hat etc.
and then I was in my work shop drawing up patterns, cutting sewing, 16 hour days over my weekend, and on Monday I sent in the photos to show them my progress.

It wasn’t what they were looking for.

I explained that it was the best i could come up with considering the budget, and they said the colours weren’t quite right.
This was all because I decided to just forgo the fabric approval and dive right in. I knew it was a risk!
They said that if they had known the options they would have found more for the budget.

Oh No! What was I to do? My tummy sank. This was a deep muddly puddle I’d sunk up to my knees in and no one was going to come and haul me out.
If I don’t get the client what they are after, I’m going to have to repay all the money already spent on materials and just wear the fact I had spent a full long weekend of sewing hard for nothing!

Think! Think! Think!
They need their costumes for their event, and I was going to be the one to deliever it! Its up to me!

I made a few phone calls and discovered I could get exactly the right colours they were after and overnight if I get them printed. But the time it would take to cut the pieces and sew them together in the right pattern was still cutting it too close to the deadline.

Then it hit me:
Design the pattern in the print.

Spend the night drawing up the pattern peices complete with colour design and logos and print the pieces up as one!
Can it be done? Yes it can be done, I’ve just never done it before.
How long would it take?
well, it took 6 hours in the end to plot the pattern from a grid onto the computer program, with some help from a friend. One of us called out the co ordinates while the other plotted them into the computer.
(9 hours all together counting that there were two of us.)

There were tail jackets, top hats and stiltwalker pants to fit, lined up along the grain on the fabric.
And that included the hours the next day I spent lining them up in scale, to fit best onto the least amount of fabric. I’d been given a quote for 15 metres. I discovered later that metres in the printing buisness stands for Square metre, and the fabric was 1.5 metres wide. Can you imagine when I got the final quote? I nearly died. But hey, what can you do but chalk it up to experience. Lesson learnt.
May I never forget it.

I sent the designs before 12 noon, and was able to pick up the finished print by 9:30 the following morning.
Amazing!

I interfaced the fabric, and sewed them up in a fraction of the time it took to sew the other jacket together (Incidently, I still have it and hire it out for a Green Ringmaster and Freddy Mercury)
I got a sewer in, and another person to help cut and interface and glue things
In between i dashed out and added layers of paint to the living statue costume.

I used Global colours student acrylic paint and a fixative to give the pigment some movement without cracking, and found it to be really effective. The student colours worked really well. At one stage it became apparent I needed some darker pigment, and while my buyer was out called and requested some dark blue acrylic paint. He was at a hardware store and bought some from there. Great!
Except, when I mixed it with my paints, it was pretty clear the pigment was not as ‘pure’, infact it made my green look dirty, and not deeper as intended. If I had time I would have found a stockist for more “Global Colours” they are Australian made, and beautiful to use!
Damn that dirty Generic brand. I’ll never buy $2 shop acrylics either, ever again. There’s no integrity using that kind of pigmant in your artwork.

and by 10:30pm that night the stiltwalkers and their hats were finished and delivered.
Jacket, bow tie, shirt, cummberbund, pants, hat.
By magical co-incidence, the stiltwaker who was to be wearing one of the outfits the following morning lived pretty much just down the stree and turn right. Too easy. ANd in time for him to get a good nights rest.

All done without fittings amd complete within 7 days work.

I discovered a new technique!
That was the most satisfying thing about the whole process. That and completeing the costumes to the clients satisfaction in the face of potential disaster!

Living statue with brand in hand 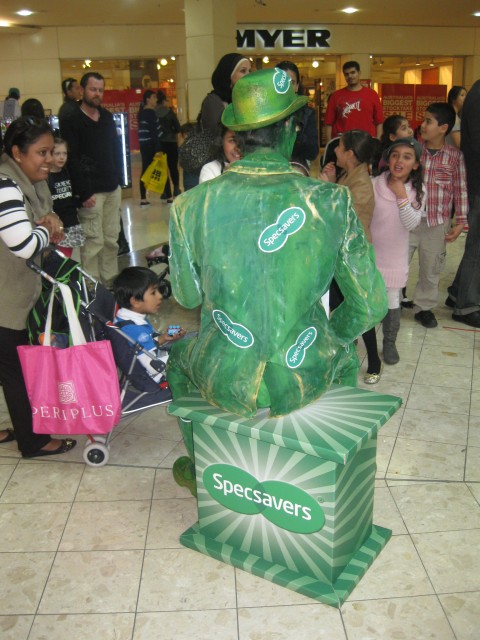 Stiltwalkers framing the door of their new store