What I was doing this time last year: Social Diary Christmas party 2011 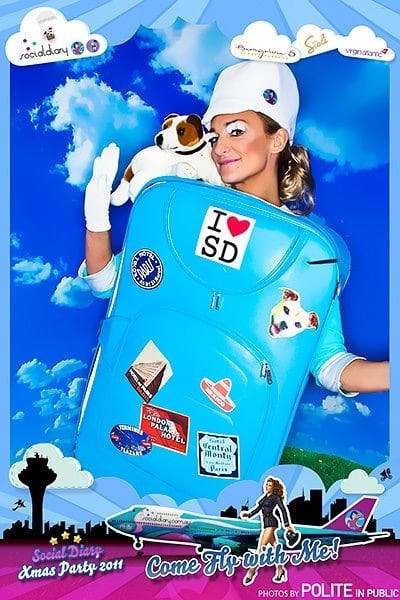 [box type=”info”]To order a custom made costume, or to arrange yourself an awesome costume hire, scroll down to contact Agent Costume in Bondi-Sydney/Australia, below.[/box]

The client was very clear about what they had envisioned for themselves to wear. My job at our first meeting was to listen, draw sketches and throw in some ideas about how we would best accomplish that vision.
Once we were clear about the goal, we were off and racing. 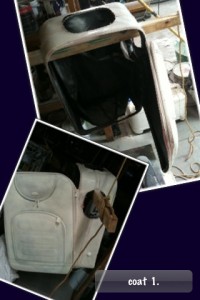 The suitcase was dark colours to start with. “Are you sure about this?” i was asked.
The suitcase was firm, and had rounded edges, it was also the correct dimentions to fit the clients body in perfectly.
Yes, I was sure. The only issue was the colour, which was rectified thanks to the use of a set makers warehouse. We found a corner unused for a few days and spray painted the case with several coats over and went back a few mornings in a row to allow dry time between coats.
The several layers also gave the suitcase a shinyness that was lacking in the original fabric cover.
We were right to start with white, as the bag soaked up the first layer of paint. It would have been a waste to use the blue, of which we only had a few cans worth.
We used sealed safety goggles and heavy duty respiratory mask, as paint fumes are dangerous to the body to breath in.
You have to be careful using these types of materials. 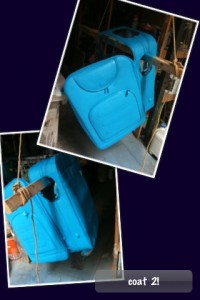 then we spray painted the suitcse costume blue.

After the white, the blue went on beautifully. It was my lucky day as a specialist scenic painter happened to be on hand in those days at the warehouse and gave me some tips on how to spray in order to get the best even coverage. Without his advice, I would most likely not have got the same even result that we ended up with. 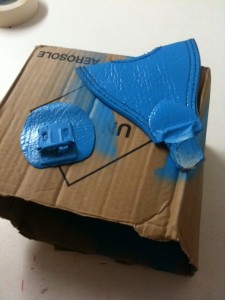 I cut these extras off another suitcase, and sprayed them to match.

The brief was for a retro style suitcase, so in our searches I found the right kind of attachments on another suitcase. We cut them off and spray painted them to match, then I glued them onto the costume to give a vintage result. I had ripped out the original lining at the very beginning of the process, and made up a new padded lining in between the paint coats drying.
Once the suitcase was dry, we glued the lining in with a super strength glue. Again we needed to use masks as the fumes can be rather overpowering, and not good for one’s liver and kidneys to deal with, believe it or not. 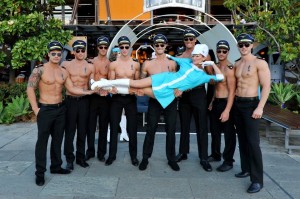 Part of the costume was a dress and hat. We were able to suggest places for the client to find gloves and boots, but the hat and dress we made here at Agent Costume.
We picked several samples of blue for the client to choose from, and had a couple of fittings before the garment and hat was complete. 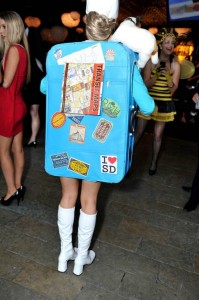 The back of the customised suitcase costume

Some of the travel sickers were custom designed by a graphic designer and printed out on a photographic paper which we then glued on. Amazingly the client magically found a box of vintage type stickers that someone had picked up on their travels, and we stuck them all over. 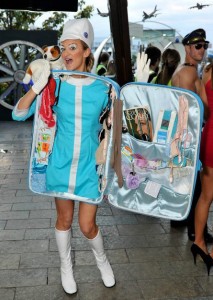 Inside the suitcase was a whole bunch of travel no nos, lingerie and card games, just for fun.

Another requirement was “Fang”
The client has a dog called Fang, and a toy representing the beloved fang, who appears on all the costumes.
I decided that velcro would be the best way to attach “Fang”, rather than glue him directly on. I glued some velcro in place on the shoulder of the case, and hand stitched velcro on the body of the dog. That way Fang could be used again for the next costume.

And here she is in the paper. Pretty cool huh!