[box type=”info”]Agent Costume can custom make you a costume for your next party or event, or hire you a costume from the collection. Contact Agent costume below to find out what’s available.[/box]

This sewing alterations story is one for the “Weirdest Sewing Alterations of all time Hall of Fame.” Maybe not AS weird as a super hero costume for a garden gnome, or a morning suit for a taxidermied mouse, but close enough.
The sewing job was to re-costume a teddy bear. Not any old teddy bear, but a MASSIVELY HUUUUUGE Teddy Bear, about a metre and a half tall and similar wide. 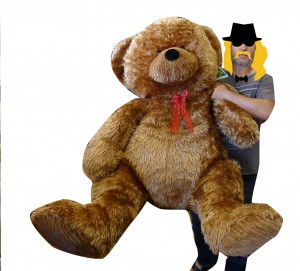 The TVC ‘buyer’ who dropped the bear off said “I feel as though everybody is looking at me like I’m the baddest boyfriend EVER carrying this MASSIVE teddy bear down the road, as if to make up for something big to my girlfriend.”

Suddenly I’m thinking anyone who sees this HUUUUGE teddy being delivered to my door may think I’M the girl with the lousy boyfriend! – just kidding.

But in fact, I WAS suddenly scanning my brain to analyse all past gifts recieved … is it true that people give gifts to apologise or cover up for something and not necessarily because they just want to do something nice and make you happy?
What spin out!
If not for a looming deadline I may have got lost there!
Those stories are for another time, and another place.
Back to the tale at hand. 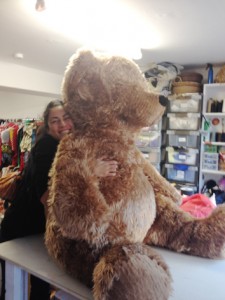 This massively cuddly Teddy Bear was to recieve an emergency extreme makeover under the capable scalpel of my steady hands over the weekend, ready to shoot first thing Monday morning. The task: to turn Cuddles the Bear into a BEAST.
I had recieved the graphics to guide the operation. Several conversations later the bear was delivered and operation “Bear 2 Beast” was underway.
It was Friday afternoon, close to 4pm, and Saturday I had set aside to hire costumes to people, and sew together an Arab robe and headpiece for pick up later in the afternoon. The next hour and a half was my only time before the Beast pick up to source materials.

Emergency! Emergency! After racing off to locate the right kind of foam, it was time to grab the fabric. Thank goodness for the local fabric store, open in good time for me to whizz on down and select a good array of primary coloured fabrics in various textures, as was desired by the art director and client.

Back to Agent Costume Headquarters.
I put the materials aside next to the newly named “Cuddles” and carried on with alterations and other tasks that needed to be complete for Saturday.

Saturday came along, the Arabian Night’s gown was complete, some final touches on another Arabian nights theme party, a pair of jean alterations,and then finally the road was all clear for operation Bear 2 Beast to commence.

It seemed the most secure way to fix this thing would be to slash the bear at the bottom, unstuff him and work from the inside out, after unpicking his ears, this is what I did.
And what do you think a bear like this is stuffed with? 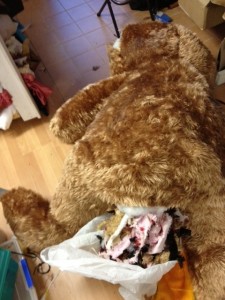 Sugar and spice and all things nice?
Look! All maner of foam off cuts, and the occasional fabric off cuts from other sewing jobs. Weird.
It reminds me of the old sawdust filled soft toys in days of yore. Use the scraps, nothing to waste.

After the first strategically placed slash came the garbage bags full of stuffing off cuts and foam and bits of fabric.

I stitched a heavy duty zip in, in a matching colour, figuring that it would be easier to deal with than hand sewing the seam shut at the end.
Then I unpicked the centre seam along the centre back of the teddy and machine sewed the spikes in.
The fabric for the spikes had a great holographic effect, but it needed to be prepared in such a way that it would create a spike when stuffed.

The spikes needed to be prepared and padded in the most effective spike way to maintain a triangular shape and not become a cone, and then they needed to be sewn in in such a way that they would remain upright and not flop to the side. All considerations a novice could miss, which could add days to the finish if not addressed at the right time in construction.
It took a few trials before I worked out the best way to prepare them and then sew them in.

inside out, extreme sewing make overe

The tail was constructed and added to a hole I cut at the base. It’s tough on the arms and shoulders holding everything in place and guiding all the layers under the heavy duty industrial machine. Guess who’ll be treating themselves to a muscle relaxing massage a the end of this? It’s all part of a well delivered job.

So, the spikes and tail were securely attached. I hand stitched the foam in the spikes in such a way as to ensure the spikes remained standing and not flopping to the sides, and so that the spikes wouldn’t fill up into cone shapes, like party hats, but stayed true to the design and our conversations.

Now, to refill the bear. This was a major milestone in the whole operation, but the least fun for some reason. Probably because the stuffing was so randomly cut and ransacked from wherever, i worried the blocks may affect the outsde shape of the bear if i wasn’t careful. I stuffed it as best i could, and then reached in through with handfuls of softer stuffing to smooth out any potential lumps and bumps.
Once he was as evenly stuffed as I could see, he was flipped on his head and slowly zipped up.
Ualla! Perfect.
Bear 2 Beast was now up to his ears in transformation.
We were well and truly past the half way mark.

The ear shape had been defined the night before using cardboard. I cut the red fabric and the foam using the template we had already devised, and sewed the ears together, sandwiched the foam inside, and sealed the open seam at the bottom.

Then I hand stitched the ears in place using heavy duty thread and a heavy duty needle. It was no picnic ensuring the needle got a good hold into the heavily stuffed furry head, but we got there in the end, Cuddles and I. Those ears aren’t going anywhere, and look how tall they stand! – Just like the picture I was given.
Brilliant!

I only hope it goes so well in the filming.
Looking forward to seeing the results.

Away he goes,
“Bye Bye Beastie!”

If you have any weird and wonderful alterations or a simple costume hire request, please contact agent costume below.

[box type=”tick” style=”rounded” border=”full”]Contact Agent costume for your next party costume! Custom made or party hire![/box]

Costumes for the long weekend
October 5, 2013