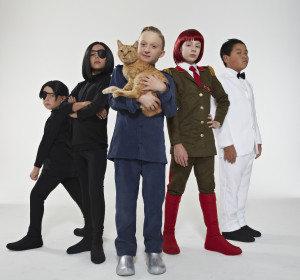 TV commercials tend to have a really small turn around time. Sometimes costumes aren’t defined until a day or two before they’re needed for shoot.
Thankfully this ad had a little more time than that, enough to design, source materials, make up patterns, and even do a fitting.
Two of the costumes were initially made to a different age group and so it took a bit of ingenuity to to resize by 2 sizes, but a costume designer has to work out how to navigate these hiccups as they occur.

Basically i took a note book to the meeting and sketched up what was being described. Then I went fabric sourcing and then drew up a clearer sketch on the computer based on available fabrics and sent it through. The designs were approved and I went ahead with them. Once they were made, there were a few little changes, accessory changes, wigs, buttons and adjustments for the newly cast characters, and away we went.

Because of the quick turn around, I hired a seamstress to help sew together some of the costumes I’d cut, and a buyer to pick up some of the items I’d sourced, wigs, shirts, new buttons, and hey presto, we got the job done, pressed and ready for shoot.

These kind of jobs are fun. They really get the heart pumping with deadlines to meet, and a budget to be able to deliver.