Superhero costumes made to order!
If you think all the best Superheroes are taken, then let me tell you, you are mistaken. There are offices and streets full, on this planet, of superheroes still waiting to be expressed, are you one of them?
Then wait no more, make an appointment, come on in for a meeting and together we can create your personalised Super Hero Costume to help you express the super powers of your dreams.

Some people are so busy working on other things in life, that they need come in to see an expert to get their ideas put into reality, in a realistic time frame.

Take this super hero for instance. 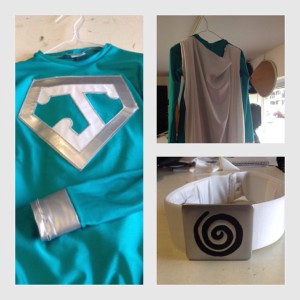 We discussed the event. The purpose of the event. The kind of guest this person was at the event, the type of people that were going to be there, the expectation of the host, the comfort factor of the the guest, the impressions they were willing to give, the expression they wanted to bring to the party. We discussed the guest’s role in the business hosting the function.
Then we spoke about super powers, and how to express those powers. And then we chose colours.

After our meeting, I drew up an illustration to confirm the ideas we’s spoken about:
Flight, mind reading Jedi powers, a belt with zipped pockets to house a smart phone, and wallet items, house keys. 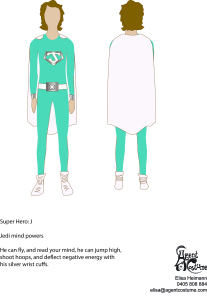 the design was confirmed, and off I went. 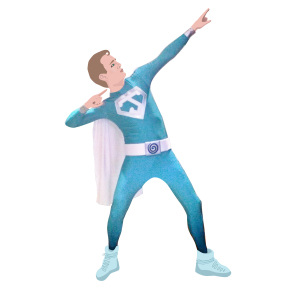 and away he goes!
He can fly, has Jedi mind powers, and his silver wrist cuffs deflect negative energy. Amazing.

He won best costume of course!