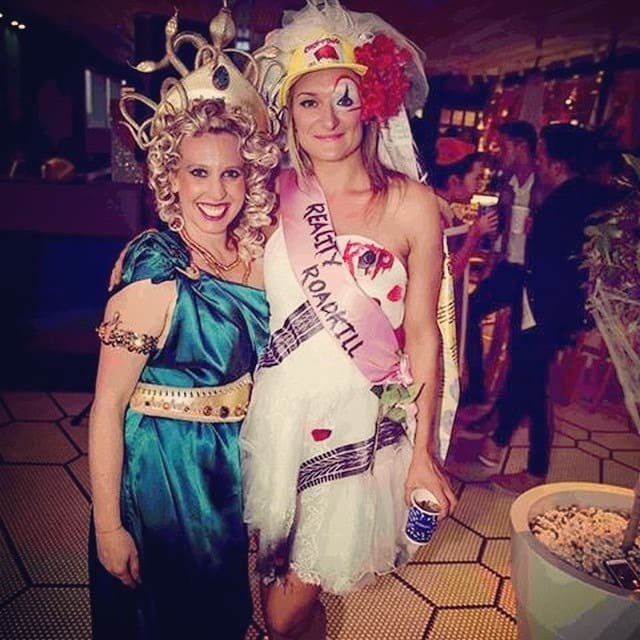 Last year for Social Diary’s Melbourne Halloween dated Christmas party, we made the host Tiffany’s costume and the fearful gorgon Medusa for her lovely assistant. 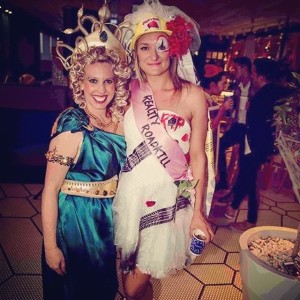 The original brainstorming session finished up with “Reality Roadkill” a comment on the downward spiral in the state of reality Television. The costume featured references to “the Block” “The Bachelor” and “Dancing with the Stars”
We turned “The Block” into “The Chopping Block” after participants had sacrificed months of their working lives to the TV show for minimal repayment.
The bachelor gave us “Love Betrayal” and a failed marriage proposal, not forgetting negative media reports impacting his profession life outside the show.
Dancing with the Stars gave us Mark Holden’s clown performance, and also impacted the respect and credibility in his private and professional life.

On request, I created some “Reality Road Kill” and “RIP” graphics on a beauty pageant sash, some tyre skid mark graphics and Chopping Block logo, while the client shopped around for a cheap wedding dress- which we slashed into the hem and and other props – a knife for the heart, rose petals to glue haphazardly to the accident site, a hardhat and clown wig.
We also procured a graphic designer to lay out the images on the veil, to further cement the concept of “Reality RoadKill”
The fear of ones life taking a negative turn after involving oneself in a Reality Television series. 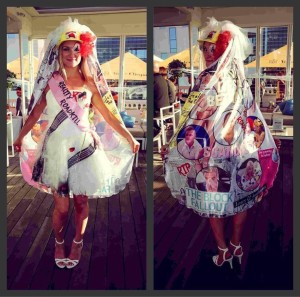 and there you have it, The Social Diary Melbourne Christmas Party costume for 2014

Do you need an amazing costume for your next event? Contact us at Agent costume for a quote and to make an appointment.

Do you need a costume? We would love to hear from you! Please fill out this form and we will get in touch with you shortly.
Categories: Costume Parties and Festivals, Events & EntertainmentBy ElisaMarch 13, 2015Leave a comment
Tags: best costume makerbest costumesBondibondi costumescostume makercostume shopcostume stylistcustom made costumesfancy dressmade to ordersydneySydney costumes