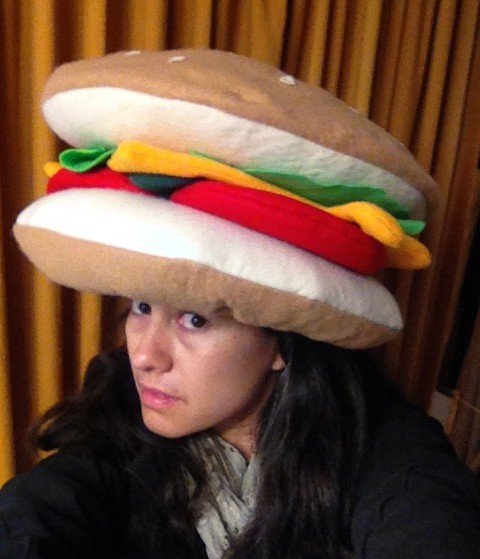 “Can you make a schnitzel novelty costume?”Long answer short: Yes. Time frame and budget were discussed and we came up with a solution. The cheapest way we decided in the end would be to print one up and make a costume from the print. It would save days of testing and layering materials, not to mention hiring a spray booth. The Project did not have that kind of budget or timeframe. After several phone calls regarding materials and availability, I booked a buyer for half a day to pick up all materials in time with the print being ready, so everything could be delivered in one go. 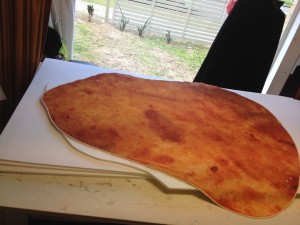 All other jobs were put on hold for a few days until this project was completed.

I cut, sewed, cut and glued, covered the framework and glued it all into place.

A chicken costume was delivered for the feet and the head, but what a disappointment to discover the costume inside was not the costume on the picture of the box or internet advertisement!
Days before we had scanned the internet looking for the best feet, and now once delivered, the package did not match the promised purchase! As it turns out, not all chicken feet are created equal.
With only a few days until the shoot, and a very persuasive phone call, the exact feet were finally located and delivered, just in the nick of time. Phew!

A new top was made using the chicken costume yellow fur arms, and hand stitched yellow fur feather boas, as luck would have it, I found the perfect yellow boas in only the 3rd shop I searched, and they were the last two in stock as well. We also sewed up some orange leggings to reach from the schnitzel into the newly arrived chicken feet.
I wish I had a photo of it. I should have grabbed my neighbour to step in and model for me before it went out. Here’s a picture without the yellow fluffy arms or feet. 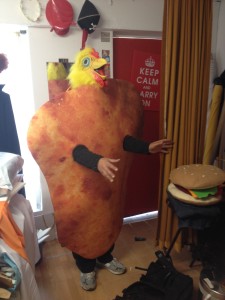 Done and dusted.
Picked up just in the nick of time.

oh, and half way though the schnitzel project they asked if I could also make a hamburger hat.
The answer to that question was… 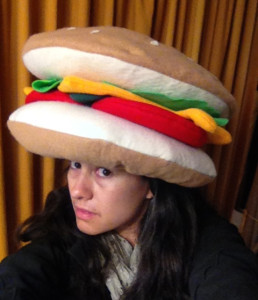 Here is the Schnitzel illustration I came up with. The client wanted SUPER BIG, and they drew a little sketch on a piece of paper. I’ve noticed that sometimes super size can be over kill. Costumes don’t need to be two stories high to make an impact, especially once I understood how it would be used. Using intuition (a hunch based on experience) I gave them two options, the size they asked for and a size I thought they’d probably go for in the end. and quoted on both. Both costumes required different construction times because of the extra gluing for the larger one. The materials didn’t come in the size required to construct the bigger size, requiring extra pre-preparation time.

After confirming the location, I was told the bigger schnitzel wouldn’t fit in the space well once camerals and lighting were added. So in the end, we did go with the smaller option.
I was glad I took the time when I did to quote. Something was telling me it would be the way to go in the end. 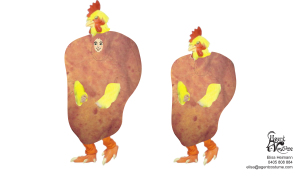 Do you need a costume for an event or special purpose? Call up, or Contact us in the form below.