Custom costumes made in Sydney 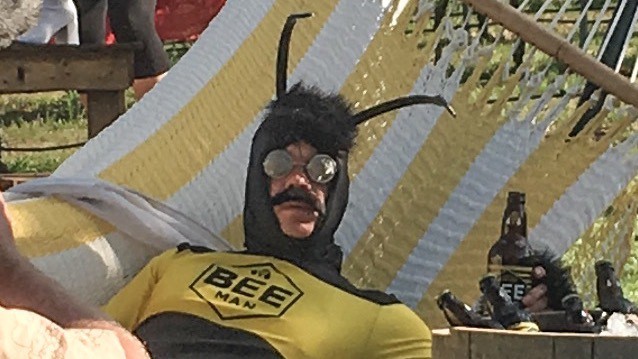 You can get custom costumes made to order from Agent Costume’s bondi based sewing workshop.

Check out the results of one project from the end of 2016. How cute is this moving picture?

Take a good look at Bee Man and his Mini Me Bee drone for the refreshing Bee Mead brand, sold at BWS stores around Australia, in various flavours.

When I was approached 2 weeks before the shoot to make a Bee suit costume before Christmas, I wasn’t sure it could be squeezed it into a busy schedule. Luckily, a previously booked job was put on hold for a day, just enough to time to draw up a print graphic for the suit in logo colours. A few days later another day became free, to cut and sew the outfit together. It’s a tricky weaving game in busy times to switch the mind from one job to another, and then back again.

..once i agreed to consider making the bee suit, and started calculating time and materials, they threw me a curve ball. They had a drone! Bee Man wanted a bee costume for his drone! A drone costume? due in under a week?!?
There was concern there wasn’t enough time to get it made to fit, snug, and light enough and secure out of the way of drone propellors. So I worked late and over the weekend, testing, fitting, adjusting. I had sent a graphic to the fabric printer, including a couple of prints for the drone to match Mr Bee Man, with fingers crossed, it could be adjusted adequately to make a Bee Drone suit!

It did! There’s something to be said for experience, it gets easier to hit the bulls eye in less shots.

I packed a bunch of costumes into the car, and was ready on site to quickly style and add a splash of fancy dress colour on a Sunny afternoon in country New South Wales.

If you keep a look out, you’ll see me, somewhere in the party scene…nodding away, two wizards getting the low down on the latest party potions..